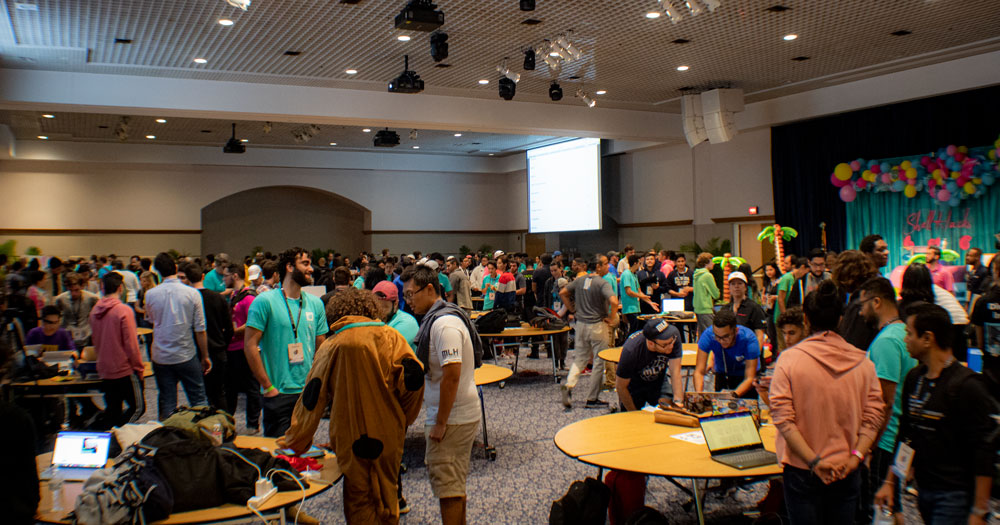 Being a cutting-edge IT oriented company, Spathe Systems prides ourselves on hiring young professionals that offer a fresh look into the tech industry. In support of growing these individuals and providing them the opportunities to excel in their craft, we sent our Co-Op group of Junior Developers to the Florida International University’s Annual Shell Hacks Convention in Miami, FL.

Who are the Co-Ops? 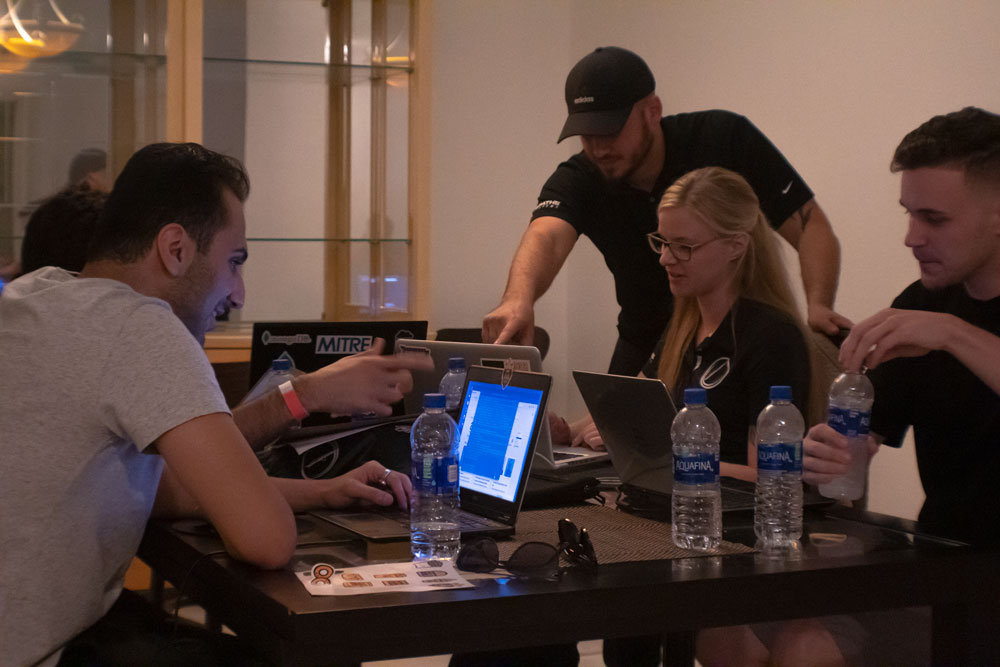 Spathe’s Co-Op team is a group of eight Junior Developers who, with the help of Spathe Senior Software Engineers and Developers, are currently working on USSOCOM’s SOF Hybrid Cloud building applications contributing to the Command’s mission execution. All eight members have graduated from a university or certification training course or are still attending university for IT related degrees. They took ShellHacks as the perfect opportunity to show off their abilities.  “We had done a group coding project a few months prior to [ShellHacks] and our Senior Developers really took an eye to it…”, says Hamzah Amer, one of the six employees who ventured down to Miami to compete. “I think we are all really excited to not only compete as a team, but to also put our company’s name out there.” The team competed in the Front-End category and while they did not place, the experience of participating in Florida’s largest hacking convention was more than valuable.

ShellHacks is a 36-hour tech event where students from all different areas come together to learn and build innovative tech products. It offers all different assortments of coding challenges including front/back end development, IT security, and Data Science. The event is also an official member of Major League Hacking and is sponsored by a wide array of big-time companies including JPMorgan, Microsoft, Twitter, Nike, Google, and much more.  All finished projects are judged at an expo early Sunday
morning for the chance to win up to $12,000 in prizes. 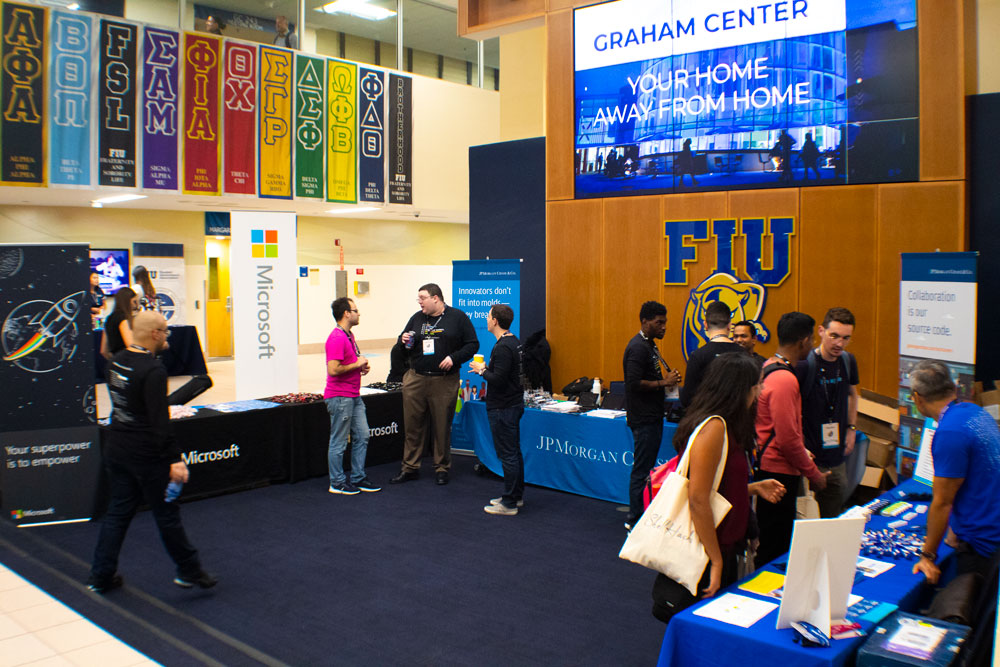 Sponsor tables actively gave out souvenirs and allowed students to submit their resumes.

In addition to a hacking convention, ShellHacks offers employment and various prize opportunities for competing students. Jennifer DiLapi, an HR Representative at Carnival Cruise actively looked for students interested in possible internship for their IT department. “There are so many people from different parts of the world all with different skills and interests and I think that ShellHacks is a great opportunity to reach out to all of them.” DiLapi was one of many representatives offering a hands-on approach to the job recruitment process that participants might face in the future. In addition to bridging the gap between students and the work force, ShellHacks offers a social approach to the job market. Jose Aranguren, one of the founders of ShellHacks, says that the main goal was “to create an event that was not only pivotal to the university, but is a platform for students to perform and succeed.” The event has grown from just a couple of hundred students its first year to over a thousand, earning it the title of the largest hack-a-thon in the state of Florida.

Through all the sponsors, mentors, and eager students, it can be said without question that ShellHacks was an incredible opportunity for our Junior Developers, but it won’t be the only one.

Transport Layer Security (TLS) is the successor from the legacy Secure Sockets Layer.a  mutual TLS protocol ensures that all data tranferred over a network is encrypted with 256-bit encryption. However, encryption is only part of the communication protocol. Public Key cryptogrophy also ensures that the parties sending and receiving data or communication requests are also authenticated.

The Security CI/CD Pipeline consists of a sequence of checks: Pre-Commit Checks, Commit-Time Checks, Build-Time Checks, Test-Time Checks, Pre-Deployment Checks and Post-Deployment Checks. These checks are identified in a pre-determined set of configuration files (typically YAML). The developer should only be concerned that the code compiles and runs through both Unit testing and Integration Testing. The Security checks that include SAST/DAST and other vulnerability tests will be executed once the developer initiates a commit of the code changes into a specific branch of the project in GitLab.

DevSecOps has fine grain scanning, depending on which branch of development the code is being evaluated. For example, if checking into a Unit Testing branch, the SAST testing may execute but not necessarily the DAST or full penetration scanning, until the code has passed SAST scanning and can be deployed into a pre-production branch. The pre-configured list of security scans that are required to be executed in order to successfully "pass" the code before it can be deployed into a higher branch is often referred to as a playbook.

As a software developer develops code and imports new libraries or dependancies into the framework, they may import code at a "feature" level. Security patch scanning is an automated process that will verify that each module is compliant - it must be hardened appropriately for the container environment in which it runs, and there should be compared against known vulnerabilities. Certain libraries will need to be at a minimum release level before it can be considered compliant. In these cases, the build will fail with a report of these violations, and the developer will need to update the libraries and re-test their code in order to satisfy this level of patching.

Security Monitoring is a pro-active mechanism to observe and track the behavior of the code as it runs. Security Vulnerabilities can occur over a broad spectrum of conditions that changes as the code executes. There may be features of the code that do not execute frequently and the vulnerability exposed by a set of conditions would be difficult to find through any manual process. Continuous Penetration testing after a project is deployed would help to monitor and report the behavior of the software under these conditions.

In addition to a security check playbook, a scorecard is used to indicate the threat of a vulnerability in the code as it is detected, and the environmental and user statistics that existed when the vulnerability is detected. Many of these conditions would be difficult to reproduce, so the Security Analysis is an essential part of resolving threats and vulnerabilities.

Certificate of Authority (CA) is an important part of modern cryptography that is the underlining component of Mutual TLS. Developers need a trusted root anchor that can manage the public key that is exposed to end users while protecting the private key of the hosted environment. Removing this responsiblity in a dependable and reliable mechanism that is external to the application development effort drastically speeds up the development cycle.

Certificate of Authority (CA) is an important part of modern cryptography that is the underlining component of Mutual TLS. Developers need a trusted root anchor that can manage the public key that is exposed to end users while protecting the private key of the hosted environment. Removing this responsiblity in a dependable and reliable mechanism that is external to the application development effort drastically speeds up the development cycle.

Dynamic Application Security Testing (DAST) is the process of testing for vulnetrabilities from the outside, and is independent of the source code languages used.

Static Application Security Testing (SAST) is the process of examining source code for security defects. GitLab (as opposed to GitHub) is an example of using SAST tools to scan code and loosely coupled components or libraries for vulnerabilities, and is language specific.

Sure the development can test before a new version is rolled out, but treating everything as code means that iterative testing would be continuous even when there are no code changes. This can mean simply updating the virus definition dictionary would trigger an automatic re-testing of all code in a project

the 1-time testing approach that has typically been utilized in the software development life cycle no longer proves to be an effective way to to safe-guard against constant threats and exposure of vulnerabilities to attackers. Secure Coding involves an iterative testing which tests code and scans for vulnerabilities on every change that is made in an application or framework. 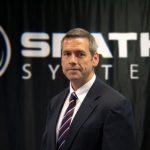 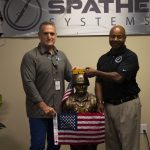